AI, Ronaldo + Messi: How to Keep an Eye on Brand Ambassadors

Home > Blog > AI, Ronaldo + Messi: How to Keep an Eye on Brand Ambassadors

Measuring the ROI of Brand Ambassadors

Football’s biggest rivalry takes center stage today when Real Madrid and Barcelona square off in the “El Clásico”, a match brimming with star power and ensuing high stakes.  It’s one of the world’s most watched and anticipated sporting events, and it’s a pivotal clash this time around. In anticipation of this head-to-head, PicScout used its AI-driven facial recognition technology to explore the visual presence of both Cristiano Ronaldo and Lionel Messi, and how their personal brands impact the game and vice versa. This is a classic case of measuring the ROI of brand ambassadors — in this case, two of the most famous sportsmen in the world.

Is it all about the money?

First off, it’s hard to ignore the money angle when these two players meet. Last year, Ronaldo ($88 million) and Messi ($81.4 million) were the two highest-paid athletes on the planet last year. What’s more, their teams Real Madrid ($3.65 billion) and Barcelona ($3.55 billion) are the second and third most valuable sports franchises in the world (only the Dallas Cowboys are worth more).

Yet despite their shared dominance over the most-watched sport in the world, Ronaldo’s visual presence is double that of Messi. Off the field is where the real cultivation of personal brand actually happens. Ronaldo has become one of the top influencers and brand ambassadors on the planet. He’s leveraged his social following and engagement into a media powerhouse that drives tremendous value for his sponsors. This is clear from his $1 billion lifetime pact with Nike in 2016: Ronaldo has always been incredibly effective at integrating his sponsors into the content he shares with his over 240 million global followers.

Messi, on the other hand, focuses his engagement on fewer social media channels and has a significantly reduced visual presence. 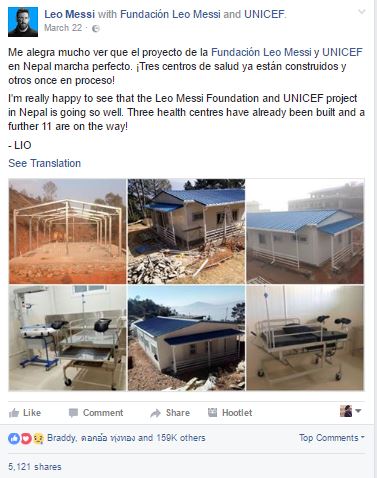 But many are musing if this may be one of the last times we may see Ronaldo and Messi go head to head — it’s been ten years since they both made their mark on the football scene. Some say that Ronaldo’s best football year, in terms of his contribution through the whole game, were between 2006-2008. And it’s been 10 years since Lionel Messi’s stunning breakthrough goal, the one which aped Diego Maradona so perfectly.

In football terms, 10 years is a lifetime, or at least the equivalent of a Golden Wedding. And at significant anniversaries it is natural to start asking just how much longer things can last like this. These two players and these two teams have dominated the football landscape for much of the past 10 years. And during this time, both Ronaldo and Messi have succeeded in becoming the sport’s best players in its history, averaging more than a goal per league game, and between them having won six out of nine Champions Leagues (including Ronaldo’s victory with Manchester United in 2008).  Ronaldo also made history last week as he became the first player to reach 100 Champions League goals. Yet how does this affect their ROI as brand ambassadors?

There’s an endless silly argument about who is better, Messi or Ronaldo, when the key point is that they are probably the two best club players in history. However in terms of dominates the visual chatter and visual web presence, Ronaldo wins hands down.

In this way, we can clearly see how PicScout’s facial recognition technology is the ideal method in assessing the ROI of brand ambassadors — in this case, representing the brand of football itself. Learn more here about how PicScout’s AI-trained computer vision can measure the visual impact of your high-value talent and ambassadors.